HAMPTON, N.H., Dec. 19, 2019 /PRNewswire/ -- Planet Fitness, Inc., one of the largest and fastest-growing franchisors and operators of fitness centers in the U.S., is calling "bullfit" on the current state of the fitness industry with bold new research that uncovers Americans' true feelings and misperceptions about health and wellness. In the aptly titled "Bullfit Report," independent studies from Planet Fitness, Innovate MR* and Kelton Global^ expose a growing frustration with fad fitness, social media "fitspiration" and the many myths Americans believe to be true about health and wellness and uncover just how much of a toll it may be taking on getting America moving. 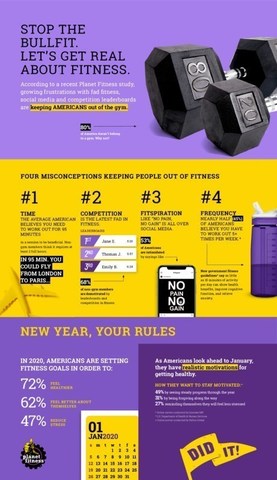 "The fitness industry has focused on the fit getting fitter for far too long, ignoring and even demotivating the roughly 80 percent of Americans who don't yet belong to a gym," said Chris Rondeau, Chief Executive Officer of Planet Fitness. "At Planet Fitness, we believe people can work out on their own terms and live healthy, happy lives, versus perpetuating certain myths that you should be 'living to work out'. It's this mentality that has kept the majority of Americans from believing that they, too, can take that first step toward better health. You don't have to work out seven days a week, two hours a day, to get healthy – the truth is that fitness can be fun, affordable, non-intimidating and not all consuming. The key is to just get started and know that every minute truly matters, and over time, can have a significant positive impact."

Moreover, as Americans look ahead to January and rewriting their own rules by setting realistic and attainable goals for the New Year, Planet Fitness also found that:

Planet Fitness offers extremely low membership fees starting at just $10 a month and a variety of benefits, including a hassle-free, non-intimidating environment, free fitness training included with every membership, brand name cardio and strength equipment, fully-equipped locker rooms, flat screen televisions and much more. The PF Black Card® membership includes additional perks such as the ability to bring a guest every day at no additional charge, access to 1,899 Planet Fitness locations, as well as access to massage beds and chairs, and more. To find a Planet Fitness club near you, visit PlanetFitness.com.

About Planet Fitness
Founded in 1992 in Dover, NH, Planet Fitness is one of the largest and fastest-growing franchisors and operators of fitness centers in the United States by number of members and locations. As of September 30, 2019, Planet Fitness had more than 14.1 million members and 1,899 stores in 50 states, the District of Columbia, Puerto Rico, Canada, the Dominican Republic, Panama and Mexico. The Company's mission is to enhance people's lives by providing a high-quality fitness experience in a welcoming, non-intimidating environment, which we call the Judgement Free Zone®. More than 95% of Planet Fitness stores are owned and operated by independent business men and women.