The ~400 km2 SMSZ Project is both named after, and, overlies a 38 km section of the Senegal Mali Shear Zone (see Figure 1), which is related to 5 large mines located both to the north and south, along strike, including B2 Gold's Fekola Mine, Barrick's Gounkoto and Loulo Mines and AngloGold Ashanti/Iamgold's (now Allied Gold's) Sadiola and Yatela Mines[1]. To the Company's knowledge, the SMSZ Project is the largest, contiguous, non-producer land package over this very prospective structural feature. Exploration targets within 5 km of the Senegal Mali Shear Zone, are considered by management to be high priority, exploration targets.

Induced Polarization (IP) surveys were carried out over the project area in 2011 for TransAfrika Resources, a precursor to Desert Gold. This work led to the definition of 15 strong anomalies that are presented in Figures 2 and 3, along with select drill results, the inferred location of the Senegal Mali Shear Zone and select geological data. Of these anomalies, 4 anomalies, B, E, F and I, are deemed to be tested with each of the 4 related to known gold zones. The remaining 11 geophysical anomalies have either not been adequately tested or tested at all. A summary of the anomalies is presented in Table 1. Testing of these geophysical anomalies is planned to begin in 1H, 2020.

Jared Scharf, Desert Gold's CEO comments "This newly evaluated geophysical data, further emphasises the potential of the SMSZ Project. We are defining new targets in a great structural setting, in generally, laterite and/or overburden-covered areas, that would not have been picked up by conventional soil sampling and mapping. As well, most, if not all of these anomalies are of sufficient scale for the discovery of a new, significant, gold deposit." 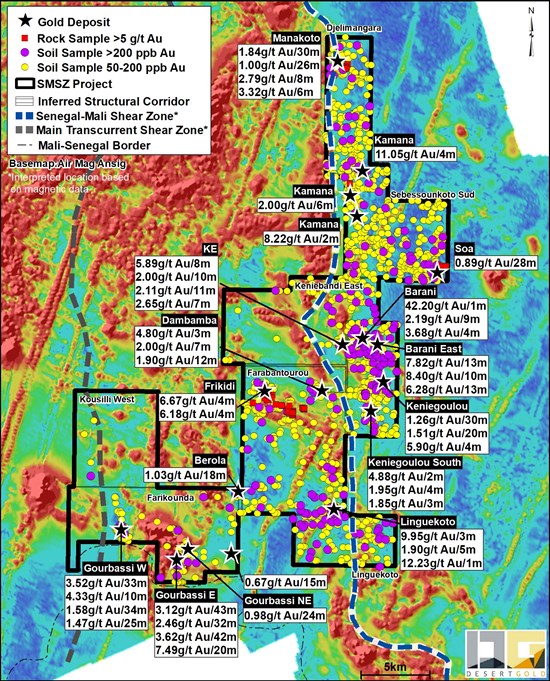 *All gold grades over width, with the exception of the Soa prospect, represent drill holes with the true widths, for most holes, ranging from 70 to 95%. **The Soa Prospect result is from a trench with true widths unknown. Estimated true widths for the Berola Prospect are unknown. True widths at the Gourbassi Zones range are estimated to range from 60% to 90%. 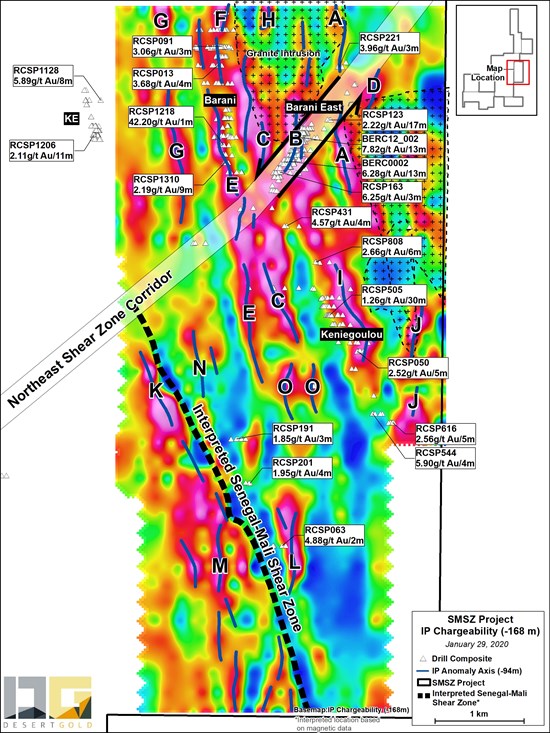 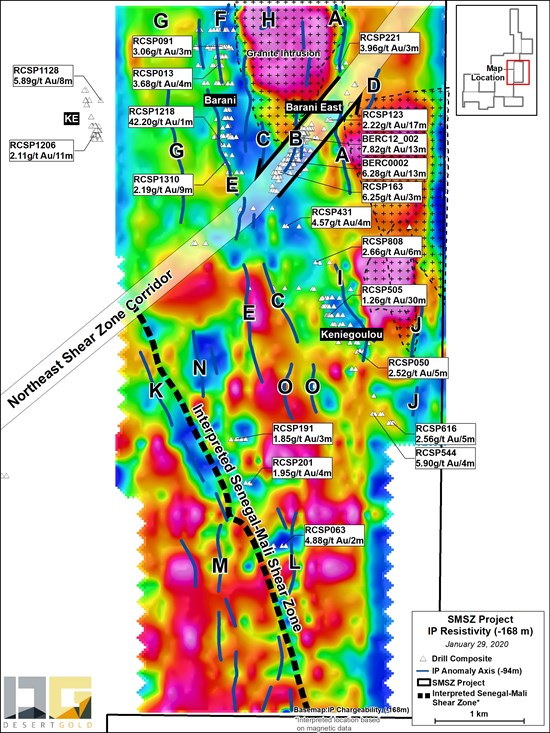 Induced Polarization surveys were carried out over an approximate 3 km by 8 km part of the project area in 2011 for TransAfrika Resources, a precursor to Desert Gold. The geophysical surveys consisted of a Time Domain, Pole-Dipole IP survey that was conducted with 6 x 100 metre dipoles. The results were modelled using the Geotomo Software inversion package. This work led to the delineation of 15 anomalies with color-contoured inversion data presented at the approximate 168-metre vertical level, well below the base of oxidation (see Figures 2 and 3).

A potential geological scenario, is early movement on the Senegal Mali Shear zone, emplacement of the granodiorite intrusions, which are in turn are both cut by the Northeast Shear Zone, which is in turn cut by the reactivated Senegal Mali Shear Zone and a series of related north- to northwest-trending splay structures. Second and third order shears appear to have developed as splays off of the Senegal Mali Shear Zone and are focussed along, and locally within, the granodiorite intrusion. Gold mineralization is hosted by siltstones, sandstones, carbonates, felsic intrusions and gabbroic intrusions, or essentially any rock types that are intersected by stronger shear structures. Alteration consists of typical carbonate sericite zones with disseminated to veinlet pyrite, quartz veining and local hematization and tourmalinization. Both iron-(hematization) and tourmaline-enrichment are associated with most of the large deposits in the region and thus are viewed as positive aspects in this overall target area.

These target areas will be evaluated in a sequential fashion. Wide-spaced auger lines will initially test for gold enrichment along the IP anomalies that are covered by laterite. If anomalous gold values are delineated over the anomalies, then more systematic auger drilling will be carried out to better define the gold anomalies prior to first pass testing by AC drilling. IP anomalies that have been validated by existing soil surveys and/or geological mapping, will be tested by AC if the rocks are weathered (saprolitic) and RC if the rocks are fresh.

Additional drilling is planned both to depth and along strike of known zones with a goal to delineate mineral resources. Recent work at the Barani and Keniegoulou Zones suggests a flat plunge, which would support continuing to test high grade zones, along strike, at or about the same vertical level. The Barani East Zone, which is controlled by a different structure, appears to plunge moderately to shallowly to the southwest, with new drilling targeting down plunge of the known lenses and along strike, with a goal to discover additional lenses.

The company, also plans to extend the IP geophysical surveys to the north, since many of the anomalies are open to the north and the favorable northwest orientation, of the Senegal Mali Shear, appear to persist for approximately an additional 2 km before appearing to trend northeast for approximately 4 km and after that, northerly.

On Behalf of the Board of Directors

To view the source version of this press release, please visit https://www.newsfilecorp.com/release/51956