Penny Stocks To Watch As Tech Bounces In July

Earlier this month we started talking about EdTech penny stocks to watch. The long and short of it is that education technology and eLearning are becoming a bigger focus. That takes into consideration the fact that many cities aren’t going to go back to school in the physical sense at the start of the school year. Alternative measures are under review right now and it isn’t just a matter of everyone “Zooming In”.

[Read More] Are These Penny Stocks Your Vice? ‘Sin Stocks’ To Watch In July

Things like security issues, scalability, specialty learning, etc. are all on the table. As we said this month, in lieu of going to a physical location, applications and technology are making it easier to get what we need without leaving our homes. Obviously, in 2020, this has stemmed from stay at home orders, lock-downs and the like due to COVID-19. Needless to say, it has created somewhat of a pivot for the world.

Every level, from grammar school to higher education, plans on going the virtual route at least to start the year. There are even big investments coming in from companies like Microsoft as well. The company recently invested roughly $1 million in London start-up Kano, which is focused on teaching kids how to code. Meanwhile, large-caps in the space like K12 Inc. (LRN Stock Report) are boosted the workforce.

The company said it expects to hire more than 1,300 educators to support grades K-12 nationwide for the 2020-2021 academic year. With so much momentum right now, are Education Technology Penny Stocks teaching people a thing or two about what the market likes?

Despite the pullback in most technology stocks on Friday, there are signs that the sector might bounce before the weekend. Shares of most large technology stocks slid on Friday after a mix of bad earnings, bad news, and generally, bad sentiment triggered an early selloff in the sector. Aside from the education technology niche, tech penny stocks overall have begun to jump. Will Friday see a strong finish to a wild week in tech?

Houghton Mifflin Harcourt Company (HMHC Stock Report) has just started finding its way onto the list of penny stocks to watch this month. While the penny stock saw a nice jump earlier in July, it was heavily based on speculation and even fake news. Between July 15th to July 20th rumors started buzzing about HMHC stock and a supposed “deal”. That rumor alone triggered a rally in the penny stock to the tune of 93%. The confusion started building and Houghton actually came out and addressed this directly saying, “These rumors are factually incorrect.”

However, there was real news from the company that may have somewhat stimulated some bullish sentiment in that period. The company introduced Teacher’s Corner™. This is an online space that supports continuous professional learning for educators. After a bit of shuffling in the stock market this week, HMHC stock seems to have reset in a channel between $2 and $2.50 right now.

Is speculation to blame for the late-week momentum seen on Friday? In about 2 weeks, the company will host a conference call to discuss Q2 results. On August 6th, Houghton Mifflin said it will report earnings before the opening bell. As momentum builds around EdTech stocks in general, will HMHC find a place on your list of penny stocks to watch? 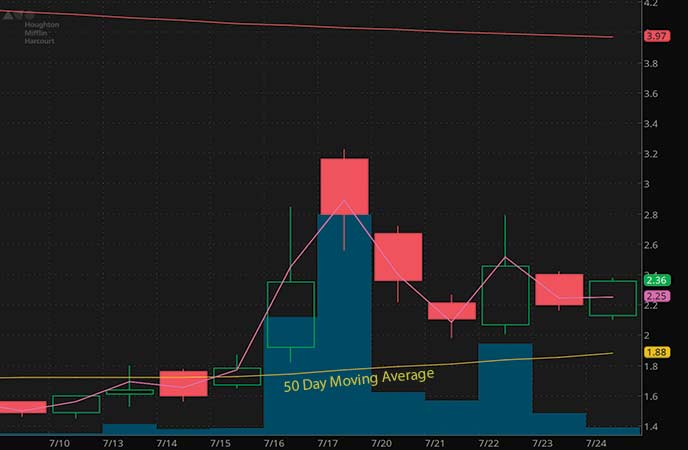 Boxlight Corporation (BOXL Stock Report) has been on several of our lists of penny stocks to watch this year. On July 12th we started to follow this exact trend of speculation. Specifically, we talked about more reliance on technology right now. This year Boxlight released its MimioConnect. This is the company’s cloud-based teaching and learning platform that helps teachers streamline lesson delivery in remote and blended classrooms.

Since then, that idea has obviously grown into a whole sub-sector for technology penny stocks. While there hasn’t been much news from the company in July, Boxlight did bring on some new talent. The company announced the appointment of R. Wayne Jackson and Charles Amos as independent members of its board of directors. In particular, Amos served as the CEO of GuideK12, a K-12 education-focused data analytics company. GuideK12 was acquired by Forecast 5 where Mr. Amos now serves as Senior Managing Director.

This week Boxlight announced that it regained compliance with NASDAQ’s minimum bid requirement as well. However, something to consider right now is that as big as this move has been, Boxlight also filed a shelf registration for up to $150 million in stock sales by the company. Could that pose dilution risk down the road for BOXL stock? 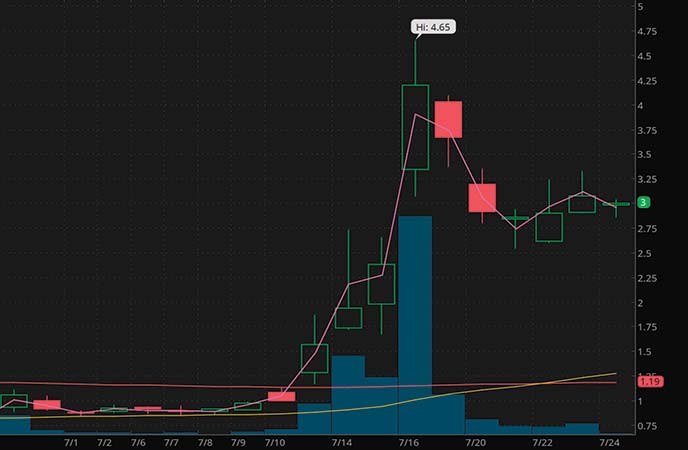 Castlight Health Inc (CSLT Stock Report) provides a software-as-a-service platform used for health benefits navigation for employees in the United States. Its platform matches employees to the resources their employers make available to them; managing a condition; and assists them to manage their benefits.

At the end of June the company announced the availability of its behavioral health solution. The newly enhanced offering, Castlight Behavioral Health, is now available to all customers on the company’s flagship platform, Castlight Complete. This was in response to the growing behavioral health crisis impacting employers. The company also launched its Working Well for Higher Education. It’s essentially a solution that helps academic institutions manage safe campus re-entry in the wake of the COVID-19 pandemic.

While July hasn’t been too boisterous, there could be something to look toward next week. On July 28th the company plans to release its Q2 financials. There’s also going to be a conference call held after the market close. From a technical perspective, it looks like CSLT stock has used its 200-day moving average as a recent level of support. Considering the recent uptick in trading activity for CSLT stock, could upcoming earnings be an underlying catalyst right now? If CSLT is on your list, what are you expecting as far as earnings next week? Leave a comment below. 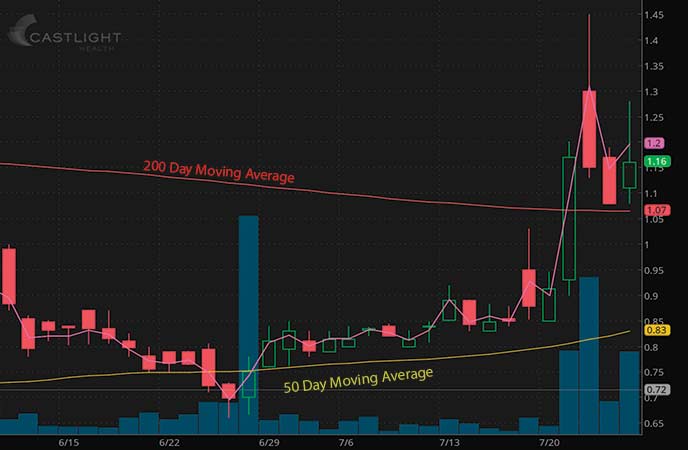 Inpixon (INPX Stock Report) isn’t a stranger to our watch lists. Initially, INPX stock hit the watch list toward the middle of May. This was after two key developments from the company. First, Inpixon announced Q1 results for 2020. The company followed up with another announcement on the availability of its Workplace Readiness Dashboards™.

Prior to this week, the only new update in July was a business update on July 8th. Some of the directives included acquiring an exclusive global license to market, distribute, and develop statistical engineering software. Inpixon expects it to add annual revenue of $3.5 million. Furthermore, a marketing initiative, Reclaim Your Workplace, according to the company, generated “strong traction for the adoption of its technology and solutions.”

Earlier this week, Inpixon came out with another update. Though it wasn’t as substantial as the July 8th news in my opinion, it was something to take into account. The company announced the launch of its new corporate website. Specifically, Soumya Das, COO of Inpixon said, “The website provides key insights and information on all our technologies and solutions. It also enables visitors to stay up-to-date on our latest news and events and provides quick access to our Investor Relations section.”

Regardless of this news, INPX stock has continued to trade more actively toward the end of the week. Shares reached highs of $1.63 during Friday’s morning session. Volume also caught some wind trading more than 13.9 million shares before the afternoon session. Putting that into perspective the highest single-session volume day of the month saw about 14.5 million shares traded. On the flip side, technical levels at the 50-Day moving average appear to have acted as resistance recently. Will this latest surge push INPX stock through that resistance or is it set to slide back? 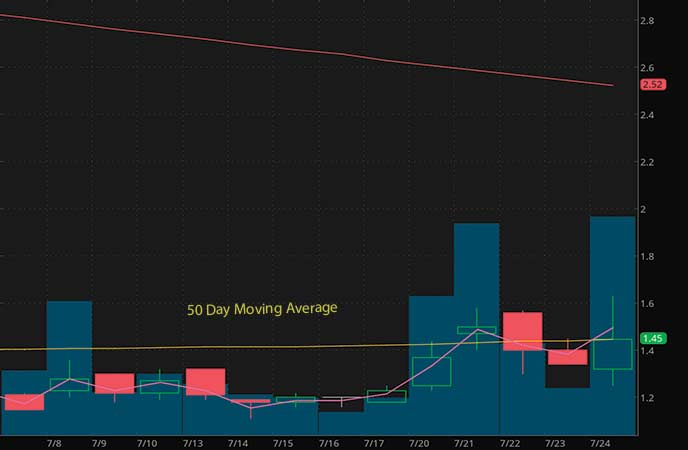 Similar to Inpixon, Biocept Inc. (BIOC Stock Report) has been on the watch lists for quite some time. Since we started following along in April, BIOC stock has climbed nearly 100% to date. If you aren’t familiar with the company, Biocept is a commercial-stage molecular oncology diagnostics company. At the end of June, the company was awarded Canadian Patent 2812291, entitled METHODS AND REAGENTS FOR SIGNAL AMPLIFICATION. The issuance of this patent increases Biocept’s total patent awards for use in its molecular diagnostics business to 40. 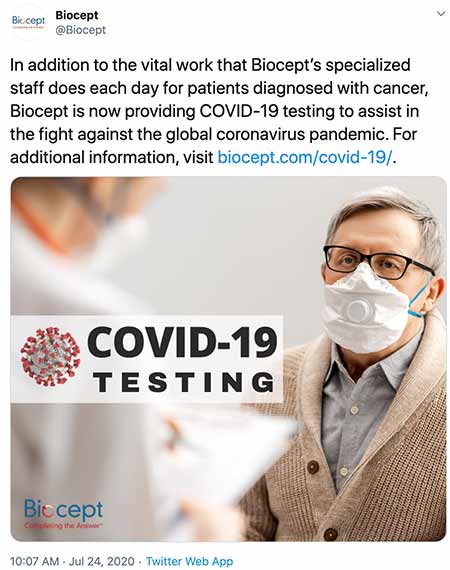 One thing you’ll come to know about certain companies is that they will use things other than press releases to get information to the public. Twitter is a popular source for this. Accordingly, Biocept has frequently sought out the social media platform to release timely information to the public. This week the company came out with a tweet that seems to have excited the market a bit.

The company tweeted: “In addition to the vital work that Biocept’s specialized staff does each day for patients diagnosed with cancer, Biocept is now providing COVID-19 testing to assist in the fight against the global coronavirus pandemic.”

Obviously coronavirus vaccine stocks have been in the news recently. But so have bio-technology companies focused on things like testing. Is this going to help spark another rally in BIOC stock or is this just another short-term spike before the weekend? 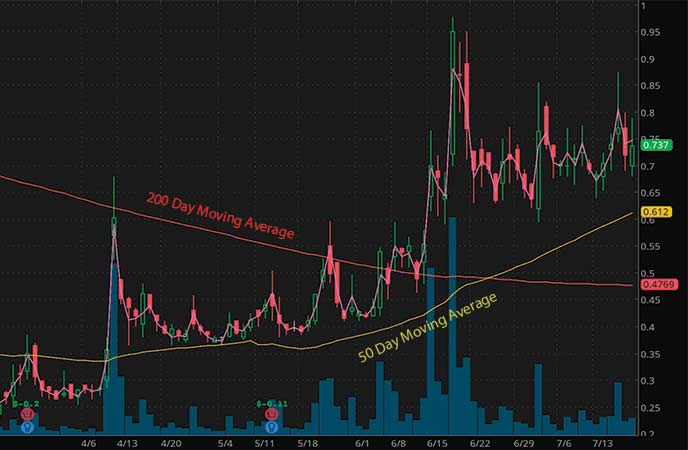