By: Penny Stocks to Buy, Picks, News and Information | PennyStocks.com - Feed
These 5 Biotech Penny Stocks Saw A Surge This Week, Will That Continue?

Now that 2020 is behind us, 2021 could be the year for biotech penny stocks to take off. While the pandemic negatively affected most industries last year, biotech managed to come out better than before COVID started. This makes sense given both the massive subsidies for the industry and the focus on creating a vaccine. In the past six months, biotech penny stocks have continued to see the spotlight from both retail and institutional investors. One of the aspects to note is that most biotechs tend to have a high correlation with one another. As they say, “a rising tide lifts all ships” and this is something the industry has experienced during the past 12 months.

One example of this came on Friday, January 8th as Citi raised its rating of Regeneron Pharmaceuticals (NASDAQ: REGN) to a Buy. This resulted in many other biotech stocks rising alongside it. On the other side, because the industry is speculative right now, volatility is very high. It’s not out of the ordinary to see certain biotech penny stocks jump or fall in the double or triple digits during a given trading day.

With solid growth in the past few months, investors are hopeful about the future of the biotech industry. Following the stock market crash that occurred early in 2020, the NASDAQ Biotechnology Index is up by almost 70%. With virus cases still rising around the world, some investors believe that biotech could continue to be in focus for the near and distant future. With all of this in mind, here are five biotech penny stocks to watch in January 2021.

One of the companies we’ve discussed for months now has been Jaguar Health. A main focus recently was on the company’s royalty financing transactions. Late last year Jaguar sold a royalty interest entitling a Lender to receive 2.0x the Royalty Purchase Price of future royalties of Mytesi® (crofelemer) and lechlemer. It also gives certain up-front license fees and milestone payments from licensees and/or distributors as well as any interest, fees, and charges. The lender paid an aggregate purchase price of $6 million. Mytesi is the company’s FDA approved treatment for symptomatic relief of noninfectious diarrhea in adult patients with HIV/AIDS receiving antiretroviral therapy.

Read More What Are Penny Stocks & Can You Make Money With Them?

This week that same trend continued. Jaguar announced Wednesday that it entered a binding agreement of terms for $6.0 million for the sale of partial rights to a possible tropical disease priority review voucher (“TDPRV”). The agreement with Streeterville Capital, LLC gives Streeterville a right to 18% of the sale of a TDPRV that Jaguar’s wholly-owned subsidiary, Napo Pharmaceuticals, Inc. plans to pursue as an incentive for the development of Napo’s lechlemer drug product candidate. Lechlemer is begin developed for the indication of the symptomatic relief of diarrhea in cholera patients. 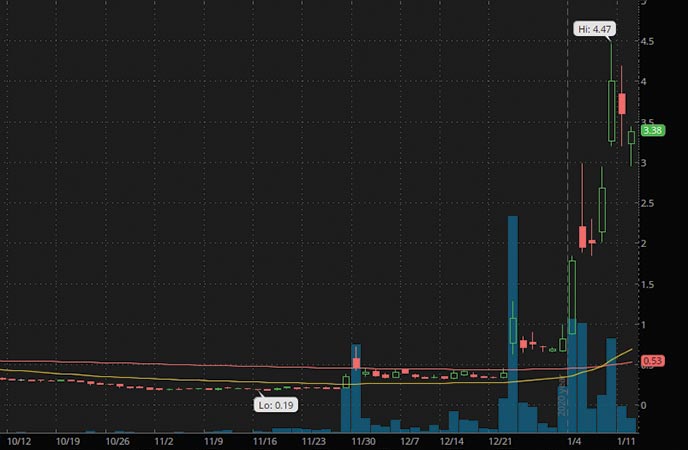 Another big gainer of the day on January 12th was Synthetic Biologics Inc. During trading and into after-hours, shares of SYN stock shot up by around 34%, ending the day at $0.88 per share. The company works as a clinical-stage biotech firm, developing novel therapeutics that can treat gastrointestinal or GI diseases. Its large pipeline of drugs includes its leading candidates, SYN-004 (ribaxamase) and SYN-020. These drugs are used in treating certain pathogenic diseases that affect the GI system. A few weeks ago, the company announced that the Washington University School of Medicine had approved SYN-004 for a Phase 1b/2a clinical trial. The goal is to see how effective this drug is at treating allogeneic hematopoietic cell transplant recipients.

The company states that it plans to begin enrolling patients in this trial during the first quarter of 2021. Steven Shallcross, CEO of Synthetic Biologics stated that “approval of the Phase 1b/2a clinical protocol by Washington University’s IRB is an important step in pursuing a potentially more cost-effective development strategy for SYN-004, targeting a highly specialized patient population.” This is an exciting step in the right direction for the company, and could hopefully prove fruitful in the long term. Whether this makes SYN a penny stock to watch remains up to you. 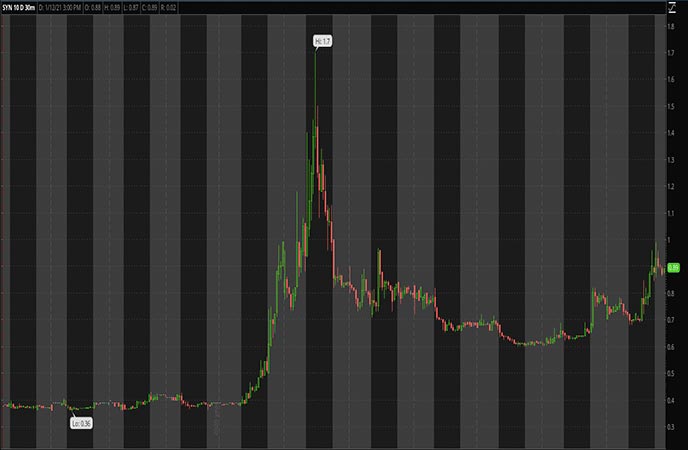 Another development stage biopharmaceutical company in focus right now is Verastem Inc. The company states that its focus is on the oncology market, where it provides a wide range of treatments. This includes a pipeline of novel drugs that can help to grow survival chances as well as inhibiting tumor growth. A few weeks ago, Verastem announced that it had begun Phase 2 of its trial on VS-6766 in combination with Defactinib. The goal is to observe the efficacy and safety for treating KRAS mutant cell lung cancer. Currently, there are very few options when it comes to treating this disease. In addition, the drugs that exist are minimally effective and carry a lot of side effects.

Brian Stuglik, CEO of Verastem, states that “our study will further elucidate the impact of VS-6766, alone or in combination with defactinib, in overcoming these challenges to improve outcomes.”

This is an important study and could have an impact on almost 80% of lung cancers. In the past week, shares of VSTM stock have shot up by a respectable 10% or so. In the past six months, however, shares are up by almost 90%. As a major biotech company, VSTM stock has a high amount of exposure to the ups and downs of the industry. But, the hopes are that we can continue to see positive momentum throughout the biotech market. 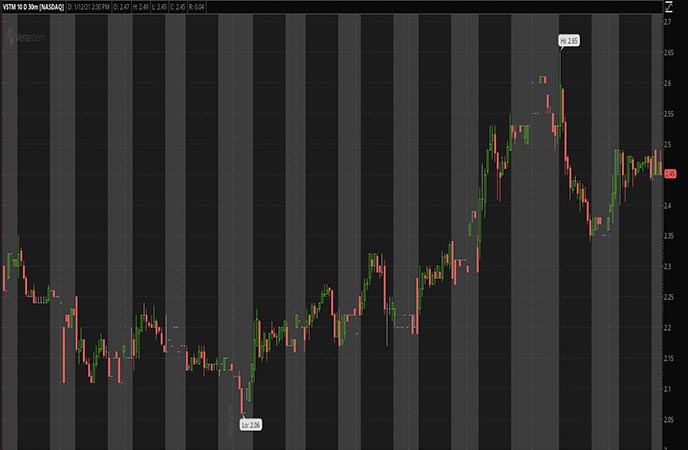 The third penny stock on this list comes in as TNXP. Tonix Pharmaceuticals saw its shares climb by around 17% on January 12th, signaling a high amount of bullish sentiment. While many gains are made without news, Tonix announced an exciting update on January 11th. On Monday, the company stated that it priced its $40 million common stock offering at $0.80 per share.

With the issuance of 50 million shares of TNXP stock, the company should have more than enough capital to continue research and development for the near future. The company has raised a lot of attention in the past few months due to its TNX-1800 vaccine candidate. This vaccine is based on the horse pox viral vector platform, and could potentially protect against Covid-19 infections.

The company states that it should have preliminary data from animal studies as soon as the first quarter of this year. While it may seem like the vaccine industry on covid is saturated, there is plenty of room for competition. Companies like Tonix Pharmaceuticals are working on alternatives to the big name vaccines that exist right now.

In addition to its covid vaccine, Tonix has several other drugs that are used to treat human diseases. This includes TNX-102 SL, which is currently in a Phase III trial to see its efficacy in treating fibromyalgia. Because of its role in the covid industry, TNXP is seeing heightened attention in the past few trading sessions. With a solid 13% gain on January 12th, is TNXP a penny stock to watch? 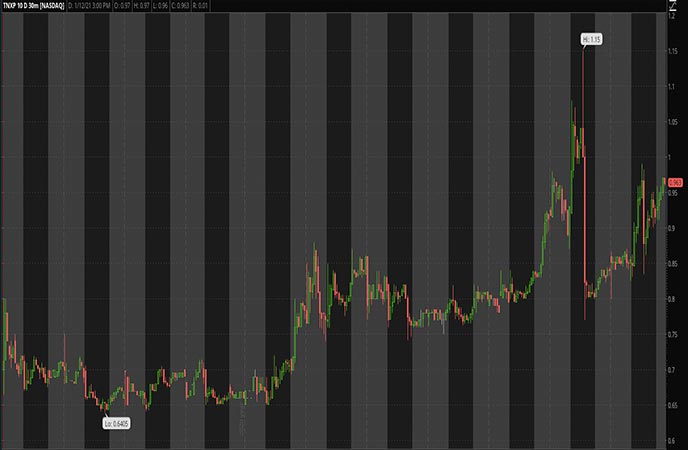 Teligent Inc. is another biotech company, but one that works differently than the others mentioned on this list. The company is a specialty pharmaceutical business. It works on producing a large range of generic medicines for use in the U.S. and Canada. This includes medicines that treat everything from eczema and dermatitis to other serious ailments. Around two weeks ago, Teligent announced its Q3 2020 financial results for the period ending on September 30th. In the results, the company reported revenue of around $14.3 million which is 6% more than Q3 2019. Additionally, the company increased its operating loss by around $4.4 million, which makes sense given the changing market demand due to covid.

Lastly, the company posted an adjusted EBITDA gain of $4.1 million which is quite substantial considering the operating loss that it took in. Teligent has managed to remain an essential business during the pandemic due to the pharmaceuticals that it produces. In addition, covid has resulted in a higher number of prescriptions being given out, which could mean more business for Teligent. While no news backed its January 12th gain of 15.9%, investors seem to be confident in the future of TLGT stock. 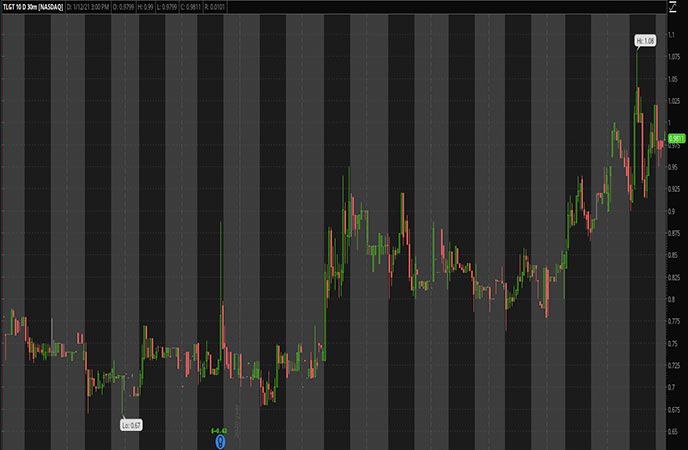 This week, small-cap stocks and stocks under $1 are ruling the retail market. Yesterday, at least 5 of the top ten most active stocks listed on the NASDAQ & NYSE were penny stocks. With such a fervor for cheap stocks, it makes sense that more traders are searching for “the next one”. With such underlying hype, it’s also important to keep your strategy and profit targets in mind.