Whether you’re talking about penny stocks or not, industry sentiment has become a huge driver for the market, in general. Granted, Tuesday’s action was market-wide and didn’t really stem from one industry in particular. However, on a given day, you can generally see certain niches in the market driving directional moves.

In light of this, one of the hardest hurt, yet one of the best performing industries in the stock market over the last year, has been energy. The mix of reopening optimism, stimulus measures, upbeat sentiment on new alternative energy opportunities, and more have helped boost the energy market as a whole.

If you look at one of the benchmark ETFs, the Energy Select Sector SPDR Fund (NYSE: XLE), you’ll see what I’m talking about. Clearly, the sell-off in March 2020 is evident. However, since then, XLE has managed to rebound by over 118% so far. That’s even in consideration of negative oil prices at one point last year. 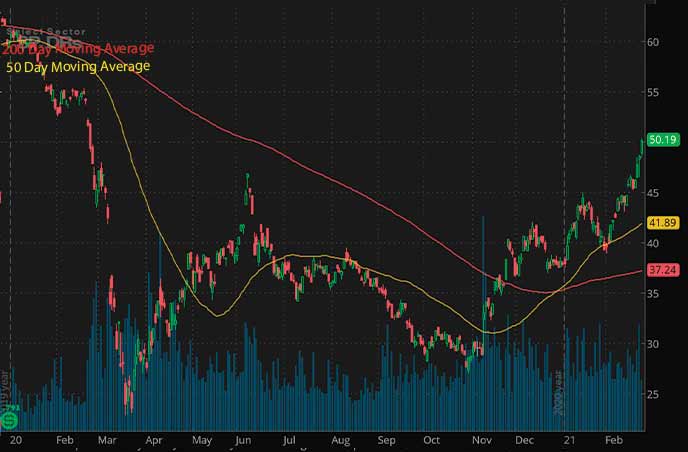 This is also to say that amid the adversity that hit the industry, the pandemic couldn’t hold down prices forever. Investors found potential in energy stocks, and they’ve also identified several new opportunities across different parts of it. This includes the usual oil and gas names. After the election of Joe Biden, a spotlight was shown much brighter on alternative energy and renewables. The focus now is on infrastructure spending, which will inherently require more fuel and sources of energy.

A Reopening Boom For Energy Stocks?

Take a look at the XLE chart. Following the November 6th election, we see the XLE spike hugely, which lit the fuse for a rally that has now lasted almost 4 months so far. You can also see this reflected in the oil futures, which pulled back shortly before the 2020 election.

Since November 2nd, light sweet crude oil futures have been on the rise. Whether it was correlated with the election, lower case numbers, reopening hopes, or the new Administration’s plan for boosting infrastructure spending, energy stocks have been on the rise in 2021. Several have not only reversed from previous losses but have also reached new 52-week highs. In light of this, are they set to head higher, or have they reached the top?

This week QEP Resources reached fresh 52-week highs of $3.72. Despite some of the downbeat sentiment that oil and gas has seen, the fact is that these forms of energy will be needed at least in the near-term, if not longer. Of course, the Biden Administration has made it a goal to build infrastructure for a green energy, net-zero carbon economy. Since there aren’t mass amounts of electric bulldozers, cranes, cement trucks, etc., fossil fuel-powered alternatives are necessary.

[Read More] Penny Stocks To Buy For Under $3 This Week, Are They On Your List?

Aside from industry sentiment alone, QEP is also in the spotlight because of its pending acquisition. Late last year, Diamondback Energy (NASDAQ: FANG) announced it would acquire QEP in a deal valued at roughly $2.2 billion. At the time, Diamondback CEO Travis Stice said, “Diamondback does not need to participate in industry consolidation to simply get bigger. We participate in corporate development opportunities that we firmly believe will increase the long-term value of our stockholders’ investment.” 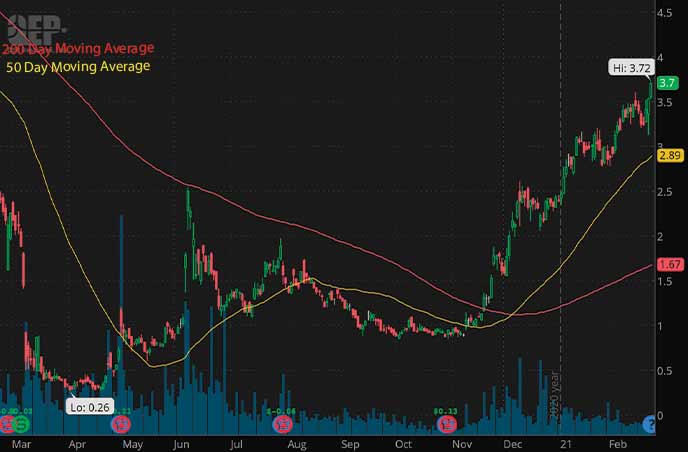 Another energy penny stock reaching new 52-week highs this week is Crescent Point Energy. Shares of CPG jumped to highs of $4.20 during Wednesday’s morning session. This came on the heels of the company announcing its 2020 results and reserves. The company also confirmed a quarterly dividend of CDN $0.0025 per share to be paid on April 1, 2021.

Crescent Point has also been going through an acquisition of its own. This time, Crescent announced an accretive acquisition of Kaybob Duvernay assets for $900 million. The company said the deal further enhances Crescent’s balance sheet strength and sustainability, including its expected free cash flow generation. It’s expected to close in April 2021. 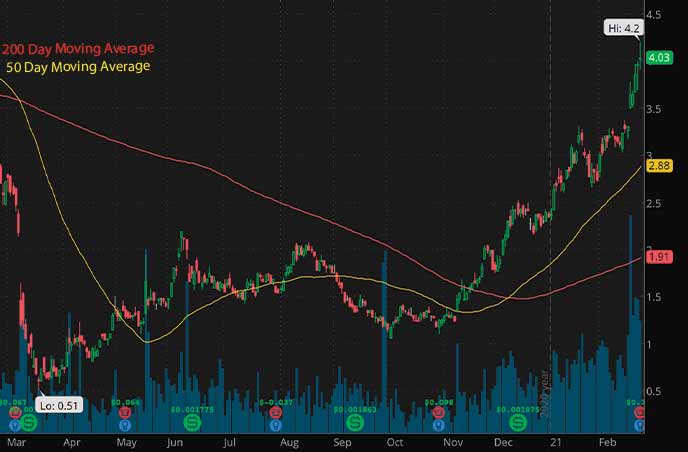 Centennial was one of the energy penny stocks we’ve discussed several times over the last few months. Since the start of November, in fact, CDEV shares have exploded from $0.60 to new 52-week highs this week of $4.29. This 615% move wasn’t solely based on the move in energy stocks. Though it has helped maintain a certain level of momentum in the stock.

The company itself has also executed several milestones of its own. This year, analysts at UBS boosted its price target from $1 to $2.30 while also maintaining a buy rating on the stock. This has proved to be a valid target, with CDEV greatly exceeding it so far.

The company recently gave its 2020 financial results as well as its 2021 outlook this week. “We added a second rig in December and are excited to resume operational activity. Importantly, our team continues to drive higher efficiencies in the field which will remain a key focus for us in 2021. Coupled with current strip pricing, our reduced cost structure, lower well costs and shallower base decline rate set us up for free cash flow generation this year. We expect to organically de-lever the balance sheet and end the year in a stronger financial position,” explained CEO Sean R. Smith. 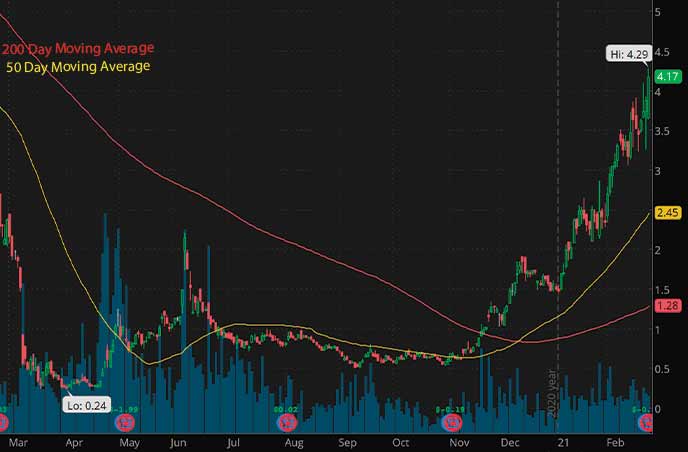 Similar to Centennial, Ring Energy also reported its financial results and 2021 outlook this week. Among several highlights, the company pointed out its current debt and cash position. This included a reduction in debt by $47 million during the fourth quarter of 2020. There was $313 million outstanding against its Senior Credit Facility as of December 31, 2020. Ring also reported that it exceeded its 4th quarter 2020 production guidance, producing 9,307 net barrels of oil equivalent per day.

“Benefitting from our strong free cash flow position, and with oil prices improving, we secured a drilling rig in early December and initiated an NWS drilling program on some of our highest rate-of-return acreage in Yoakum County, Texas. All four wells are expected to be completed and on production by the first week of March. With solid operational and financial results, we enter 2021 well positioned financially to continue to pay down debt and execute our high return development drilling and workover projects.”

Paul McKinney, Chairman of the Board and Chief Executive Officer

Will REI stock continue along with its bullish trend with tailwinds from energy sector momentum & upcoming potential milestones in March? 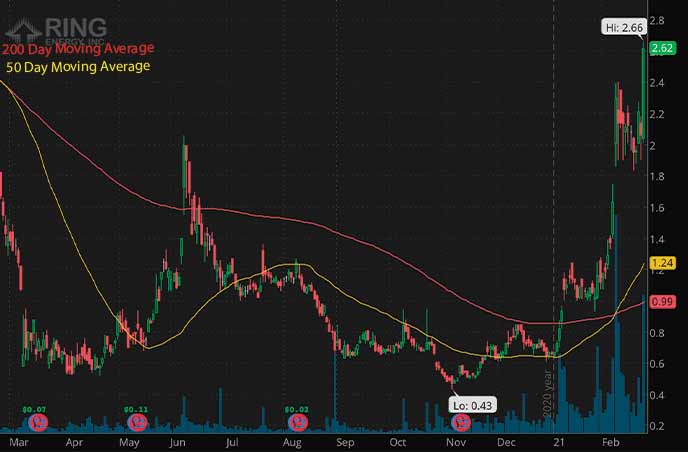 Energy Penny Stocks To Watch In 2021

When it comes to energy stocks, keep in mind that volatility can come into play with changes in different things. I’m not just talking about the price of oil itself. I’m also talking about shifting headwinds coming from government initiatives and spending. We’ve also got to keep track of virus cases. Though they are down right now, any slight uptick can have an impact on energy names. However, it seems energy is a hot topic, and the market is favoring sector stocks.